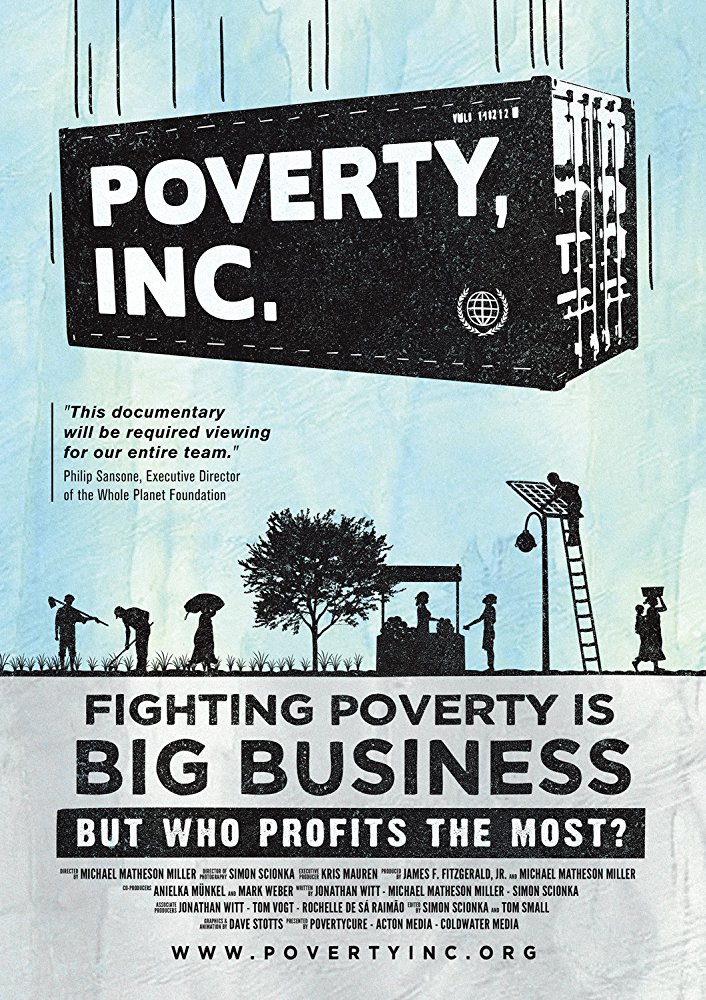 As humans, we thirst for knowledge and a greater understanding of the world around us. As overworked students, exams, final papers, and that toppling pile of readings keeps that thirst quenched, but can be monotonous at the best of times.

Enter the documentary. As forms of art, documentaries can provide a more stimulating alternative to learning about world issues, historical accounts, and different perspectives. The visual aestheticism of the film medium appeals to the artistic appreciation of audiences, while the content of the subject matter appeals to their intellect. What could be a more perfect combination for a rainy Sunday afternoon?

We’ve compiled our top 5 documentaries about global development every student should see, check them out below:

The question of foreign aid is a nuanced, even controversial, one. Poverty Inc. takes the issue head on, revealing how Western organizations have created an industry of development that does more harm than good in the long run. The documentary challenges us to look outside of the development paradigm perpetuated by stereotypes in Western media. Advocating partnerships instead of paternalistic relationships, Poverty Inc. is a catalyst into the new status quo of development.

After watching this documentary, you’ll have a newfound criticism of one-for-one businesses like TOMS shoes, or celebrity aid campaigns (ahem, looking your way Bono).

Based on Naomi Klein’s book of the same title, The Shock Doctrine stitches together archival footage, interviews, and lectures by Klein. Though Klein herself is not credited for the documentary, which is actually the work of filmmakers Michael Winterbottom and Mat Whitecross, it follows her theories about ‘disaster capitalism’. This is the exploitation of human tragedies, such as war, by Western governments to push less favourable policies into legislation- most particularly economic policies that echo Milton Friedman’s neoliberal and free market values.

You’ll walk away from this documentary with a new view on the implications of certain historical events, like Pinochet’s coup in 1973 Chile or the 1982 Falklands War.

3.) The New Rulers of the World

Who are the new rulers of the world? According to John Pilger, it’s the transnational corporations and Western-backed international financial institutions like the IMF and World Bank. In this documentary, John Pilger poses a critical perspective on the impacts of globalization, through comparisons with the history of imperialism. He goes to Indonesia to see these effects first hand as he films the appalling conditions of the sweatshops there discreetly.

Though this documentary was filmed in 2001, the substance of what Pilger says is still very relevant today. As the gap between the rich and poor continues to widen, the system will continue to be questioned and challenged.

Watch The New Rulers of the World  here!

Echoing similar sentiments as John Pilger, Stephanie Black’s documentary criticizes the role of the IMF and World Bank specifically for the implementation of structural adjustment programs in Jamaica post-independence. In the period of post-colonization, many former colonized countries, like Jamaica, found themselves under control in a different way: forced institutional reform towards free market operations in return for developmental loans. Life and Debt explores the negative long term impacts these loans and subsequent debts have had on the economy of Jamaica.

This documentary not only reveals this unequal relationship between the global North and South, but speaks of the resiliency of the Jamaican people despite the history of their subjugation.

The entity known as ‘the corporation’ is examined, analyzed, deconstructed, then put back together in this lengthy documentary. Through 40 interviews of CEOs of all sorts of industries, economists, historians, academics, and others, the Corporation considers the role and power of North American companies. Given its official legal status as an entity, with the same rights as a person, Joel Bakan puts the corporation through a behavioural assessment and likens it’s attributes to that of a psychopath. These psychopathic tendencies are examined through various historical accounts and economic theories.

Delivered in an entertaining, fast-paced manner, this documentary will leave you thinking long after the credits roll.

Watch them one at a time, or dive into all in one sitting. Either way we are sure these documentaries will keep you thinking, questioning, and challenging the norms of development and global systems.

Don't have time for a full documentary? Check out our article on the top 10 Ted Talks Every International Development Student Should See!